PersuadeMe: Finally, A Chance to Use My Random Code Generator

For the past two months, I've been totally consumed with a new project called PersuadeMe, funded (very modestly) by the Bill & Melinda Gates Foundation. It's a very cool project, involving a collaboration with many smart, talented people in the College of Education at the University of Georgia:


Donna is the PI on the project and is a world renowned scholar in language and literacy education. Mike Hannafin is likewise probably among the top five scholars in the instructional technology field and, of course, needs no further introduction to most people reading this blog.

PersuadeMe is a Web-based literacy tool that is designed to help students in grades four through eight engage in writing arguments on issues of interest to them. The tool features an on-line role-playing game in which students act as "Idea Innovators" and "Idea Investors." Innovators must back up their opinions with evidence. We use the stock market as a metaphor for the project where investors choose to fund those ideas they think are the most persuasive, thus driving up the "value" of those ideas. No opinion is considered right or wrong, merely more or less persuasive based on the evidence that is presented.

Here is a 3-minute conceptual video about the project that was a required part of the proposal to the Gates Foundation:


The voice you hear is that of Larry McCalla's, and he gets credit for designing and producing the video itself. (Although I think our proposal was strong, I have a hunch that the reviewers likely started with these videos and based much of their initial judgment on them. Larry deserves much credit for creating a very clear and persuasive video.)

I have many roles on the project, but my dominant role - and the one most pertinent to this blog posting - is as the programmer of the project. Yes, I know what you are thinking: "The project is doomed!" But, not so fast. I think I'm actually doing a pretty good job, even though it doesn't involve LiveCode at all. Instead, I'm programming this in PHP, supported with a mySQL database (with, of course, lots of HTML along the way). This is a proof-of-concept project to build and evalute a working prototype of the concept to show that additional funding is warranted.

Well, we are about to hold our first field test on Monday with a group of 8th graders. So, there is lots of work to do to prepare. One of my tasks is to create a bunch of generic user log-ins that we can put on index cards and distribute to students when they walk in the door. These need to be age and gender neutral, so I'm going to use animal names. I thought I would use the state mammals of the United States -- click here for Web site that I consulted. I took the liberty of reducing the list by generalizing across common types (such as the various dogs, bears, and deer in the list), and here are the resulting 28 animals:

OK, doing that research was fun and I can use these as the user names for all of the participants in our various field-tests. But, I need to also have passwords for each. Now, I could just try to make up some passwords given that I don't need very many -- we will probably have about eight students in our first field test, and maybe 10 or so more in our other field tests. But, it occurred to me that I could use my LiveCode project "Generate Random Codes" (see blog post from April 13, 2013) as a tool to generate these.

I decided to have passwords of seven characters, using lowercase letters and numbers as the raw ingredients (the server we are using doesn't distinguish between upper and lower case letters). I chose seven because the password plus the animal name comes to eight pieces of information, thus making it very unlikely other students would remember it should they happen to glance at another student's card. ("7 plus/minus 2" is the well-known limit of short-term memory.) This will allow a total of unique 78,364,164,096 passwords. I'd say this is more than sufficient! In reality, I only need about 18 for the field tests, so I decided to turn my LiveCode file loose for about 30 minutes and it generated about 5000 of these unique passwords, which I then copied and pasted to a text file.

Here is a screen shot of just some of the passwords generated by the program: 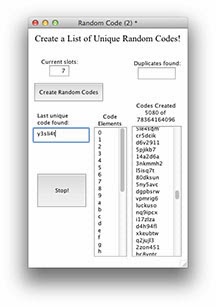 What I will do next is simply start adding the usernames to each line as I create them, saving the text file as I go. If I ever have a need for more passwords (such as assuming we get more funding from Bill and Melinda -- yes, we are on a first name basis), I'll just copy and paste the list back into LiveCode and have it start generating new passwords from there. It's great to finally have some return on my investment in learning LiveCode.

Of course, I've been spending every spare evening and weekend for the past two months working on this project, so please join me in hoping that Bill and Melinda continue to support this project by choosing to fund our next grant proposal. But, even if they don't, my investment in PersuadeMe will be returned many times over by the number of 4th-8th graders who I'm confident will find this to be an engaging and authentic place to write about the issues that matter to them.