I continue to introduce faculty and students at UGA to LiveCode. For a recent workshop, I came up with another first project example, which I call "Follow the Bouncing Ball." This is the one that the attendees voted to have me build for them during the workshop.


It's a very graphical project where an animated soccer ball bounces around the screen based on some information provided by the user. This information is simply the horizontal and vertical speed of the ball.

I made a YouTube video of me demonstrating how to build this project from scratch, so I'm not bothering to go into any detail here on how it works.

Here is a snapshot of the project: 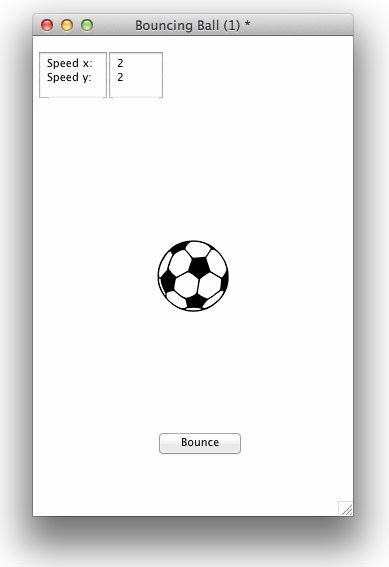 What is rather cool about this project is that it shows some very fundamental and important physics concepts and principles. It's a fun way to show the hierarchical relationship between an object's location, distance traveled, velocity of the object, and acceleration of the object. The study of a moving object is a great example of rate of change problems. The distance an object travels shows its change in position. The velocity (speed and direction) of an object shows its change in distance over time, and acceleration denotes the change in velocity. This project didn't go as far as demonstrating acceleration, but it did a good job of showing velocity as consisting of both the speed the soccer ball is traveling and direction in which it is moving. Of course, I know I run the risk of alienating people if I go too far with the physics explanations!

Here is the script of the button "Bounce":

on mouseUp
hide me

repeat until the mouseclick

set the location of button "ball" to x, y

Sir Isaac Newton would be proud.