In this post I'll explore a few of the basics of bringing video into a LiveCode project. Here is screen shot of the stack we'll build: 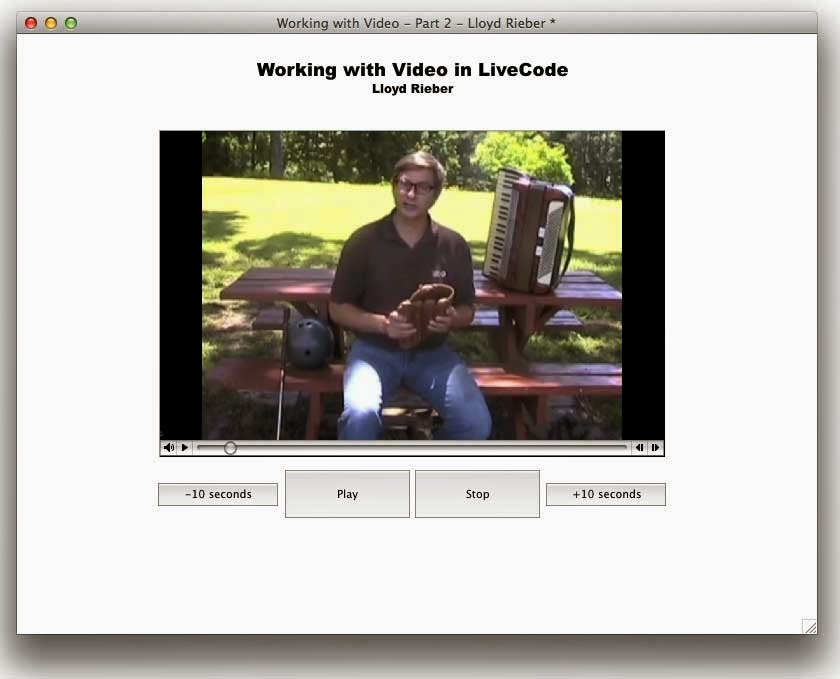 You'll obviously need your own movie to use in this project.

The first step couldn't be easier. Just drag a player object onto a card:

Source video files can either be stored on your computer, or you can enter the URL of the source video. There are some limitations on what video file types can be used. According to the LiveCode manual, video is limited to QuickTime, AVI, or MPEG file types. So, unfortunately and much to my disappointment, flash video is not a supported format (and hence, one cannot use YouTube videos.)

For many projects, this is all you need to know! The player object will now play your video and it includes all of the expected video options, such as play, pause, step forward and backward, audio control, and user control of the playhead.

Note: If you choose to resize your video, be sure to check the box beside "lock size and position" inside the size and position properties page. Otherwise, it will appear full size the next time you open the file.


To create a more sophisticated video application, such as the video analysis tool I have in mind, we need to explore how to script various video functions. Let's explore just a few of the most basic here. A good place to start is scripting our own play and stop buttons. The scripts for each button are very simple:

In my earliest Video Analysis Tool prototype, I've already included the option to move the video playhead forward or back by one second. Let's explore how to do that as our next script. Instead of one second, let's use an increment of 10 seconds in order to really notice the playhead skipping ahead or back.

To do this, we first have to note where the playhead is currently in the video. Then, we'll just add or subtract 10 seconds worth of video and jump to that new spot. Let's say we stopped the video one minute and 15 seconds into the video. LiveCode does not "see" the video in seconds or minutes. Instead, it will play a particular video in a certain number of intervals per second. This interval will vary from video to video. Fortunately, we can use the timeScale property to learn what this interval is. Let's open the Message box (an option under "Tools") and type in this script:

put the timescale of player "Player"

After you press Return, a number will appear in the message box. For the video I'm using, the number is 90,000. Yours will most likely be different. So, this means that for my video, the time scale of my video is 90,000 intervals per second. (An amazingly large number, in my opinion, and I freely admit I'm not sure why it is not something more standard like 30 or 24. I'm sure I'll learn about this eventually.) Let's use this information to script out a button titled "+10 seconds" that will move the playhead forward 10 seconds:

The first line puts the timeScale property of the movie into ts. In my case, it will be 90,000. So, each second will last for 90,000 intervals. The second line notes what is the current position of the playhead in the video using the "currentTime" property and puts that value into t. Line 3 does a little bit of arithmetic. First, it multiplies ts by 10, so that we will have an interval of 10 seconds. Next, it adds that interval to t. Finally, we set the currentTime of the player to t, which of course is 10 seconds ahead.

To create a button that will skip backwards 10 seconds, let's start by copying and pasting the "+10 seconds" button and title it "-10 seconds," and then change the plus sign in line 3 to a minus sign:

This is a good start to learning how to control video with LiveCode scripts. Don't worry, much more is to come.

If you are ready to learn more about working with video in LiveCode, here is a good LiveCode tutorial to check out. I found it very helpful to begin to learn how to script video options and techniques for me, even though I didn't actually built the project shown in the tutorial. Basically, it helped push me in the right direction.
Posted by Lloyd Rieber at 2:12 PM

Email ThisBlogThis!Share to TwitterShare to FacebookShare to Pinterest
Labels: video