I Aspire to Be a Second Rate Designer

My goal in this essay is to confront the unfortunate rhetoric that pervades most professional careers, namely that our goal should be to be the very best. Of course, taking any alternative position is a precarious place to occupy, because one would be subject to the criticism of being a slacker, or someone who is satisfied with mediocre work. I stand in neither of those places, but I am very pragmatic and realistic about my abilities and aspirations. As I have worked with both faculty and students at the University of Georgia about designing learning experiences and environments, I've seen too often the paralysis that can occur with just the thought that one's work is no good. I especially want my students to take on the identity of "designer," but this is something many resist. They feel they don't yet quality for such a title. My position is simply you are a designer or you can be a designer by choosing to do so.

The inspiration for the title of this essay comes from a comment I remember Steve Jobs making about Microsoft products. My memory was that he called them, as a whole, second-rate. As it turns out, my memory was kind to Microsoft because Jobs actually called them third-rate:

I remember thinking at the time how I wish I could design software as good as that sold by Microsoft. Second-rate in this context seemed like an excellent aspiration. Yes, I long admired Steve Jobs' pursuit of perfection and remain very inspired by the excellent products and software produced by Apple. But, his vision within an environment of very talented (and well compensated) people is not one that I can put into practice myself.

Consider the following saying, attributed to Voltaire: "Perfect is the enemy of the good." I first heard this a long time ago in the context was that we should never be satisfied with something just being "good enough." Instead, we should strive for perfection. (An essay by Charles Osgood on being "pretty good" makes the same point.)

In contrast, I interpret this quote in exactly the opposite way. I view the strive for "perfection" as a debilitative or paralyzing state that usually results in a person either not trying at all or just giving up. And, apparently, Voltaire agrees with me, if you can believe the Wikipedia entry.

A more modern version comes from Sir Robert Alexander Watson-Watt, a pioneer in the development of radar during World War II: "Give them the third best to go on with; the second best comes too late, the best never comes." Given the war context of this quote, I can easily imagine the sense of urgency to just get on with it and stop all sniffling about it not yet being good enough.


I've read a lot of the "design thinking" literature over the past couple of years. A really good book that I use in one of my doctoral design courses is Creative Confidence by Tom Kelly and David Kelly. Here is a link to a great TED talk by David Kelly about this. Here a few good quotes from the book about the potential for everyone to be a creative designer:

"One prerequisite for achieving creative confidence is the belief that your innovation skills and capabilities are not set in stone. If you currently feel that you are not a creative person – if you think, “I’m not good at that kind of thing” – you have to let go of that belief before you can move on." p.30

On Bandura's concept of self-efficacy:


“Doubts in one’s creative ability can be cured by guiding people through a series of small successes. And the experience can have a powerful effect on the rest of their lives.” p. 40

On the failure paradox:


“A widely held myth suggests that creative geniuses rarely fail. Yet … the opposite is actually true: creative geniuses, from artists like Mozart to scientists like Darwin, are quite prolific when it comes to failure – they just don’t let that stop them.” p. 40

On permission to fail:


“…you can get better faster at coming up with new ideas if you give yourself and those around you the leeway to make mistakes from time to time.” p. 49

And finally a good reminder that creativity is an innate human characteristic:


"We forget that back in kindergarten, we were all creative. We all played and experimented and tried out weird things without fear or shame. We didn’t know enough not to. The fear of social rejection is something we learned as we got older. And that’s why it’s possible to regain our creative abilities so swiftly and powerfully, even decades later." p. 6

Me and My Accordion: Love Unrequited

And yes, this is an actual photograph of my accordion!

I think a good way of thinking about this issue is by analogy to writing or music. Just as many resist taking on the identity of designer, people are likewise hesitant to assume the mantle of writer or musician, even if they have been keeping a diary or journal for years, or have long enjoyed playing a guitar or other instrument as a hobby. Many feel the identity of writer or musician is reserved for those special few who have achieved success or acclaim.

Allow me to tell you a little story about me and my accordion. My story mirrors the classic Greek theater experience in that it contains both comedy and tragedy. In the last 30 years or so, I've focused solely on the comedy. I'm the guy at the meeting who says, "I'm not sure that's a good idea, but hey, I play an accordion, so what do I know." But, there was a time when I thought I could be a good, even great, musician if I just practiced hard enough.

I took accordion lessons for four years from the age of about 8-12 from the truly great accordionist Steve Seventy - a legend on the Southside of Pittsburgh who unfortunately died in 1988 at the young age of 61. (His name is not pronounced "70" by the way, it is pronounced "se-VEN-tee".) I paid for these lessons myself with my paper route earnings. I stopped taking lessons at about the time I started high school because practicing had long become a chore, not a passion. But, around my junior year of high school, I regained an interest in music and thought to myself that if I practiced long and hard, I could be good. After all, that was the rhetoric I had heard - you can do anything you want if you just try hard enough. I also tried to conquer my fear of performing in public by actively looking for opportunities to play at my high school and church for various occasions. I really tried to be good. The problem, however, is that I was and am a terrible accordion player. I'm missing whatever gene is needed to be musically skilled. My greatest triumph in playing the accordion was when I was a public school teacher and played for my elementary school students. They didn't care if I good or bad, they just loved the fact that they had a teacher who owned this amazing contraption and something resembling music came out of it when he strapped it on.  I take great satisfaction in thinking that these kids - now in their mid-40s - likely think back fondly to that one teacher who played an accordion. I bet that's one of a handful of things they do remember with a smile from those years.

So, yes, I am a musician, though a poor one. But, I am a better person by having made the attempt. And, making a joyful noise is a noble and honorable endeavor.

Me and LiveCode: 35 Projects in about 40 Months


In my own design work, I know I'll never attain the status of a great designer. But, I love to design and don't want anything to interfere with that passion. I still see the status of a second-rate or even third-rate designer as an aspiration and high achievement. I would only be a step or two away from being a first-rate designer, which would be a tremendous accomplishment.

I actually date my first experiences as a "real" designer to those same years as a public school teacher when I learned how to program in BASIC on the Apple II computer. I actually published two software titles back then. One was a compilation of educational games titled Serendipity, with the most successful being a game to teach fractions titled Mineshaft. The second was a golf game titled rather pretentiously Professional Class Golf. This golf game remains my magnus opus and I keep an old Apple IIe in my office so I can play it occasionally.

Writing this essay gave me some reason to pause and reflect on my experience these past few years learning LiveCode. Using January 1, 2013 - the launch date of this blog - as the starting point, I've designed about 35 LiveCode projects in about 40 months, just about all of which I've written about in this blog. The projects have been big and small, though mostly small. Very few are worth more than the virtual ink I've used to write about them, but that is beside the point. I'm a designer because I design and build. 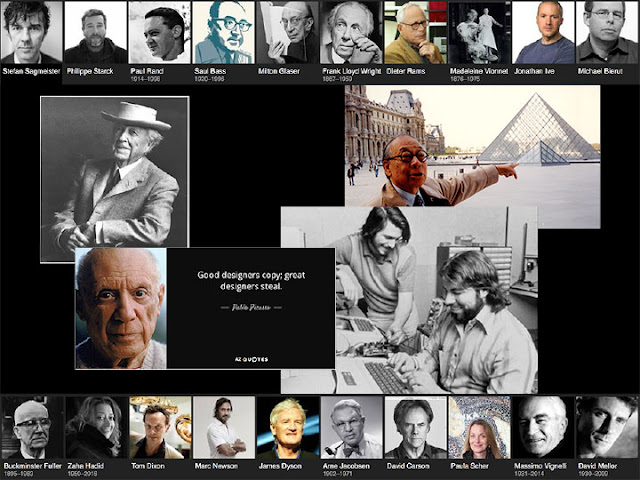 A collage of "first rate" designers resulting from a Google search of "great designers." (Genius, I know.) A special tribute to Steve Wosniak, one of my personal heroes. "The Woz" gets much too little credit for his contributions to the culture of Apple, in my opinion. I always highlight Frank Lloyd Wright because, well, his middle name is "Lloyd."


So, it is with courage and conviction that I hope everyone will replace any aspirations to be the top "anything" in their field with simply being the best you can be, knowing that you will improve only by doing something. This means that you will do your very best, but realize that when you are judged against the best in your field, you will likely not stack up too well. And that's OK. So, instead of striving to be a sport's MVP, strive just to make the team. Become a writer not to make a million dollars with a best-selling novel, but to express yourself or to communicate well with your colleagues and friends. Instead of producing the world's next killer app, design something that will help just a few people in some small way.

Trying to be the best you can be will make you want to try to do things you never did before. The key idea here is that you, and you alone, will be the judge of your success. If someone else judges you and criticizes you, you will know whether or not you did your best. You should accept the criticism, perhaps with an ear or eye toward something useful in the person's feedback. That is, instead of feeling "destroyed," you should be open to some information that will improve what you've already done. This is a very empowering and liberating feeling.

And, if you think your ideas are so obvious as not to have any worth, then check out this video by Derek Sivers:


1. I gave a presentation with the same title as this essay on August 19, 2016 at the 3rd annual IDD@UGA Conference in Athens, Georgia.

2. It also just occurred to me that my taking on the identity of designer came at the very same time as my most successful accordion experiences. Hmm, maybe that's a correlation worth exploring and advocating.
Posted by Lloyd Rieber at 12:36 PM