Creating an Instructor Version of my Q Sort App

I am again attending the annual conference of the American Educational Research Association. This year it is located in San Antonio, Texas. I will be presenting a poster session about my research on instructional applications of Q Methodology. I think I have finally found a suitable title for this research:

I think this is more accurate - and more interesting - than titles I've used in the past (e.g. "Adapting the Q Sort Research Methodology for Instructional Purposes"). I'm also quite proud of my poster if only because I managed to build an interactive component into it, something I've yet to see in an AERA poster. 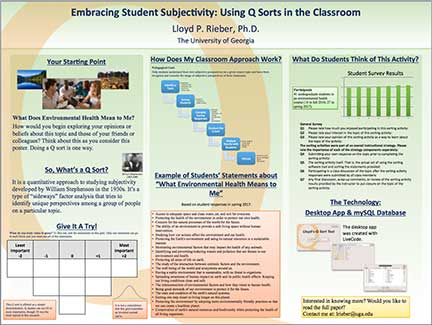 
I'll have pizza statements that people can move around the Q sort board in the lower left-hand corner of the poster.

I also just realized this is my first blog post for 2017 - quite a long hiatus. However, this does not represent my LiveCode work over the past four months. I've been involved in many LiveCode projects, including updating my video analysis tool and building an agricultural education prototype. So, there is lots to write about in the coming weeks and months.

The topic of this post is about some of my latest Q sort app development work. I've field tested my Q sort app and emerging instructional strategy many times over the past few months, most notably in an undergraduate course in environmental health. Here's a quick reminder of what the app's home screen looks like: 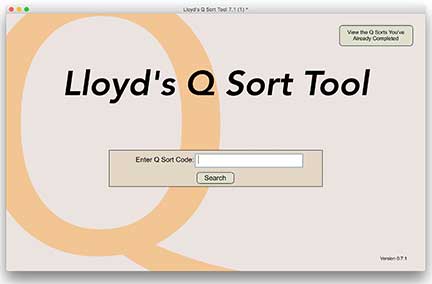 The app and my approach have worked very well. But, one thing I have found myself needing is an instructor version of the app to be able to do the following things:


At first, I just made some quick hacks in a copy of my "regular" Q sort app. However, I came to the conclusion I needed to devote some serious time to creating a viable instructor version. One other good reason to do so is that I'm very close to entering the next phase of this research and development activity, namely giving other instructors their own accounts in order to use my Q sort app as they wish.

Rather than create a truly separate app just for the instructor, I figured the smartest thing to do was simply to build into the existing app a way to quickly allow it to be transformed into the instructor app. That way, I don't have to keep up with two apps. Remember, the current app is still very much a prototype. I'm sure lots of revisions and enhancements will be made over the coming months. So, I created a global variable "varInstructor_version" that is set to either true or false. If false, the app works as the student version. When true, it works as the instructor version. All I need to do is set the variable, then create a standalone for whichever version I want at the time. When set to true, the home page will show one small, but significant checkbox: 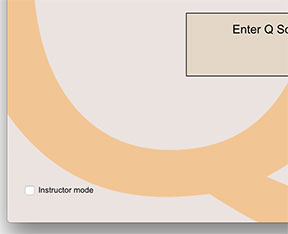 If the instructor leaves the box unchecked, the app works just like the student version. If checked, another variable - varInstructor_mode - is set to true. Two things then happen. First, another button appears titled "Analyze a Q Sort": 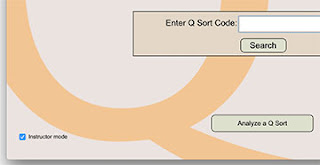 Clicking this button will give the instructor a pop-up window to enter any Q sort code. The app jumps immediately to the card showing the list of people who have completed the Q sort along with buttons to do the analysis.

Second, all data upload scripts are disabled within the app. That way, the instructor can enter the Q sort code in the regular input box (the same one the students would use), then go through a complete demonstration of how to complete the Q sort. The following message is shown in the final screen that says the data are being uploaded:

The phrase "not really" cues the instructor that their data really has not been uploaded.

I'm very excited by the prospect of soon giving other instructors the option to try out my Q sort app with their students. I gave a presentation about my work with Q sorts at the annual Conference on Higher Education Pedagogy at Virginia Tech back in February. The turnout was good and the main question I received afterwards was "Can I use it with my students?" I promised everyone that I was working on it. Likewise, I hope my Q sort work is as well received by folks who come to my poster session at AERA. However, AERA usually brings a much tougher crowd to sessions. Fortunately, I walk by the Alamo each morning on the way to the conference, so I'm inspired to be "armed and ready" to defend my work. Of course, despite the heroics of Davy Crockett, James Bowie, and Colonel William Travis the Texans lost the battle. Very reassuring.