I'm a big fan of National Public Radio (NPR) here in the United States. Every Sunday morning on Weekend Edition there is a segment called the Sunday Puzzle hosted by Will Shortz, the puzzle master. Will is a very famous puzzle guru (and ping pong player) who is probably best known for editing the New York Times crossword puzzle.

I'm usually in the kitchen cooking or doing the dishes when the Sunday Puzzle segment airs. Each week it features a "lucky listener" who Will challenges to solve some puzzles on air. Will then challenges all listeners with a weekly puzzle to be solved by Thursday. Will then randomly chooses one of the winning entries to join him on air the next Sunday. I'm really terrible at solving these puzzles. But, I just submitted my first correct answer to a recent puzzle. I solved it largely due to LiveCode.

Here's the puzzle, quoted from the show's transcript:


This seemed straightforward to me and I quickly determined it was easier to start with names from the Bible and work backwards. What constituted an affliction seemed too vague to me. The few names I thought of did not pan out. Interestingly, the first name I thought of was Judas. (You would think the first name I thought of was Jesus, given my Catholic school upbringing. But, I personally think Judas is one of the most interesting characters in the Bible.)

Following Will's directions above, here is what you get when you transpose Judas:

This is certainly not an affliction I'm aware of. After trying a few more names, I gave up and went on to other things. But, for some reason, this puzzle stuck with me over the next few days. Then, as I was falling asleep Wednesday night, it occurred to me that I could easily write a program in LiveCode to transpose every name in the Bible if I could find a web site listing all of the names. The next morning, I quickly found all the Bible names on the Internet (I forgot to write down the link) and wrote the following program in LiveCode.

Here's a screen shot of the app: 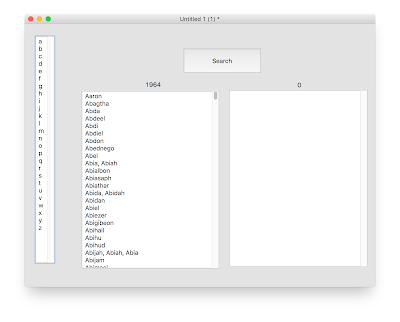 The names of the three fields, from left to right, are "alphabet," "names," and "afflictions."

But, this posed no problem as I knew I could easily extract just the first word in the line.  And, you might notice that some of the names in the screen shot have a comma in them. I needed to look for that and strip it out if found.

Here is the complete script in the button "Search:"


Here are just a few choice explanations of key lines in the script:

There are three repeat loops:


Here is an explanation of other key lines:

After clicking the button "Search," it takes LiveCode a few seconds to process the 1964 lines in field "names." Again, I didn't know exactly what affliction I might find, but I figured I could scan the list easily to find one (or more). Here's a screen shot showing the correct answer: 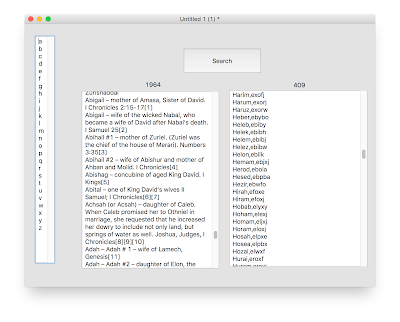 I missed it the first time I scanned the list of 409 matches. But, I found it on the second pass:

I was one of 1100 people who submitted the correct answer. Thankfully, I was not chosen as the "lucky listener" to appear on next Sunday's show.