Creating a Function in LiveCode to Capitalize a Given Word

I'm working on a little project that automatically constructs a narrative - a letter, to be precise - based on some user choices. As I started to build it I immediately found myself needing a way to occasionally capitalize a given word. For example, consider the pronouns he and she, or his and her. My program correctly identifies the gender of the subject of the letter, but sometimes a sentence begins with one of these pronouns and other times the pronoun just occurs somewhere in the sentence. I didn't want to create a variable to hold an all-lowercase version of the pronoun and another to contain a capitalized version. There will certainly lots of other times when a word will need to be capitalized.

I was hoping that LiveCode already had this function, but alas I can't find it. But, it does have the function "upper," which will convert a given text to all upper case. So, I used this to quickly build my own function to capitalize a given word:

The function takes a single word as input and puts it into the local variable w. So, let's imagine that the word entered was "nowhere."

The next line takes note of the total number of characters in the word and puts this number in the variable L. Nowhere has seven characters, so L equals 7. The next line joins xupper ("N") to characters 2 to 7 of nowhere -- N+owhere -- resulting in "Nowhere" and puts this into y, which is then returned to whatever line of code called the function.

To demonstrate how to use this, I created a small stack with two fields and one button: 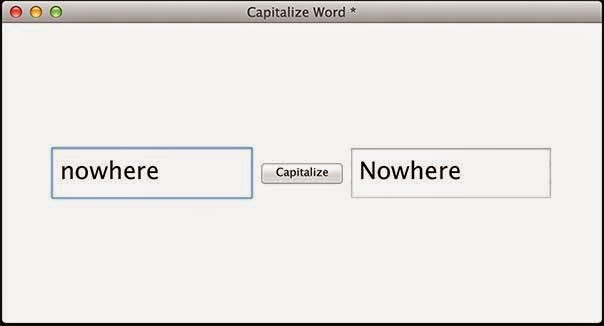 The first line simply empties out field "word2." The second line takes whatever is in line 1 of the feld on the left and puts it into the local variable w1 (think of this as word 1).

The next line calls the capitalize function, puts the result into w2, which the next line puts into line 1 of the field on the right.

I added two more lines of code to tidy things up a little. I empty the field on the left and then I make sure that the focus (the flashing vertical text bar) is put into this field.

This function will be pretty darn handy in this and other LiveCode projects!