LiveCode is an amazing computer programming language and software development environment. The apps you make with it can be run on Macintosh computers, Windows computers, Apple mobile (iOS via iPhone or iPad), and Android. The only thing it hasn't yet figured out completely is online web apps, though the promise of LiveCode's ability to export to HTML5 remains very exciting (though mostly yet unfulfilled).

With that opening lovefest of a paragraph behind me, I now turn to some frustrations. To be fair, the frustrations aren't really with LiveCode, but mainly with Apple and how the Apple Computer Company makes compliance with its software application standards a moving target.

The first step in taking my toothbrush interval timer to a mobile platform, specifically the iPhone, is to test the app in Apple's iPhone simulator, which is a part of the Xcode development software. To get that to work, one has to have all of the "stars" aligned, with the stars in this case being a metaphor for using the right version of LiveCode with the right version of Xcode and with the right version of MacOS on my laptop. In the end, I did get it all to work, but only after many hours spent downloading different versions of LiveCode, different versions of Xcode, and finally biting the bullet and updating my MacOS. And even then, I had to resort to searching the LiveCode user forums for a last bit of advice to make it all work. I detail my journey here with the hope that it might help others (or most likely just me in a few months time because I will have forgotten all of this by then).

The Challenging in Getting "Everyone to Play Nice" Together

In the end, here are the system and software specifications that are "playing together" well:

But, they didn't at first.

Let's start at the beginning. I had not made a mobile app since I made my little game Lunar Hotel Shuttle, the inaugural project for this blog. This app first appeared in the app store on November 28, 2012. Yes, that's almost exactly eight years ago, so yes, it's been a long time since I made a mobile app. Due to a very faded memory of that experience I knew that all of my software had to be aligned to work, so I crossed my fingers as I clicked the "test" button in LiveCode after choosing iOS as my standalone application setting. If it all worked, then just clicking the "test" button would automatically launch Xcode's simulator followed by LiveCode packaging and bundling the app for mobile, then exporting the app to the simulator for testing. But, did I mention this all only happens if everything is aligned properly? Right, sorry to repeat myself. Not surprisingly, it didn't work.

No worries, I thought. I quickly found this handy dandy reference page on the LiveCode web site showing all of the different configurations one could use:

My Mac's OS was Catalina 10.15.1 and my version of Xcode was 11.1.1. So, I downloaded LiveCode 9.6.0 DP-3 since that was the version of LiveCode that seemed to align with the MacOS and Xcode. That's when the frustration really began. I began exploring one rabbit hole after another, though I did learn a lot along the way. LiveCode 9.6.0 DP-3 could not be "verified" by Apple. After some Googling, I learned a way to bypass Mac's verification process:

LiveCode opened, but I still had no luck getting the iPhone simulator to work. So, I went ahead and downloaded the LiveCode 9.6.0 (this is the "stable" version, not the "developer preview" version). Alas, I was greeted with a message from LiveCode (that kept popping up dozens of times) that I had to upgrade my MacOS to 10.15.2 for my version of Xcode to work. I am always loathe to update my operating system given some very bad past experiences. But, I decided to do it anyway. Well, the only option my Macintosh's update button was giving me was a major upgrade to MacOS Big Sur and no way was I going to do that. So, after a little more Googling, I found Apple's MacOS download page and did the upgrade. Remember, all of these software downloads and installations take time, particularly given my unusually slow Internet speed here in rural Georgia. Plus, I do have a day job, so I can only work on this other "hobby" periodically throughout the day. So, the hours are ticking by. But, as I finished, my confidence now was very high for my next test.

And Again It Didn't Work

At this point, if I had rum in the house I would have started drinking. But, I need to back up a little bit because it almost worked, and more importantly, this was not the first time it had almost worked. That is, the iPhone simulator did launch and LiveCode was giving me messages that it was dutifully creating all of the needed "bundles." But the toothpaste timer app just never appeared on the simulated iPhone. Within about 10 seconds or so, a message popped up from LiveCode asking me if I wanted to keep trying given how long it was taking for the app to load. I pressed "yes" and the message popped up again about 10 seconds later. I eventually said no. When I got this far in some of my previous testing, I just assumed that the stars were still not aligned. That, it turns out, was a faulty assumption. It was at this point I turned to the LiveCode forums and the very helpful community of LiveCode programmers.

LiveCode Forums to the Rescue

I quick found this forum thread in the "iOS Deployment" topic area: https://forums.livecode.com/viewtopic.php?t=30859

A LiveCode developer named Panos offered the advice of opening the simulator first in Xcode and to wait until the simulated iPhone shows the home screen. Then, go back to LiveCode and try to test the app. Well, that worked! Here are the step to do just that: 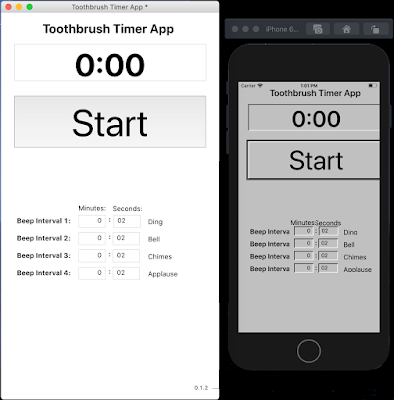 Yeah, pretty ugly, but the most important thing is that the app export and open successfully in the simulator.

A key point to be made and emphasized here is all of the right software was aligned the first time I saw the simulator launch. It was just that the simulated phone wasn't "turned on" yet. Maybe if I kept clicking "yes" to all of those message it would eventually have worked, but who knows. I'm just happy I now know what to do in order to move on.

Time, Finally, to Begin Revising the App for Mobile

Yes. I am finally ready to start the work to revise my app for the mobile platform.

I'll end by including some links to two other useful web pages:

A final good "lesson learned" worth sharing is to search the LiveCode Forums earlier in the troubleshooting process.