My Toothbrush Timer App: On My iPhone and Working (Well Enough for Now)

I've made much progress on my app in the past week. In fact, for the past few days I've been brushing my teeth with the help of my iPhone sitting on the edge of the bathroom sink running my app. It works great, just like I had hoped. I can "set it, start it, then forget it" as I start brushing.

I like to set it to provide some gentle chimes after 50 seconds to let me know the first minute is just about up. Ten seconds later, at the one minute mark, I set it to ring a soft bell to let me it is time to switch "levels" of brushing from bottom to top. Chimes again alert me 50 seconds later to let me know that I have just 10 more to brush. It's actually quite satisfying to hear the final "tada!" alert just as the toothbrush automatically turns itself off. I also find it great for my one minute of mouthwash swishing immediately after brushing.

Of course, with progress comes many lessons learned. This post contains a few highlights of what I learned over the past week.

For a few days, I was baffled by the fact that although the app would play the sound alerts on my Macintosh during development, they would not play on either the iPhone simulator or later when I figured out how to transfer the app to my iPhone. At first, I just figured it was a problem with the simulator, so I ignored the problem. But, when the sounds failed to play on the iPhone itself, I knew something was wrong. I had been consulting this LiveCode tutorial:

The problem turned out to be that I had failed to provide the full path to the sounds. I had put the sounds in a folder on my Macintosh called "Sounds for Toothbrush App." This folder is at the same level as the app. I used the "copy files" option in the standalone settings, just as the tutorial described. I didn't realize that the path shown in that window had to match the code exactly. Here's a screenshot of the copy files window: 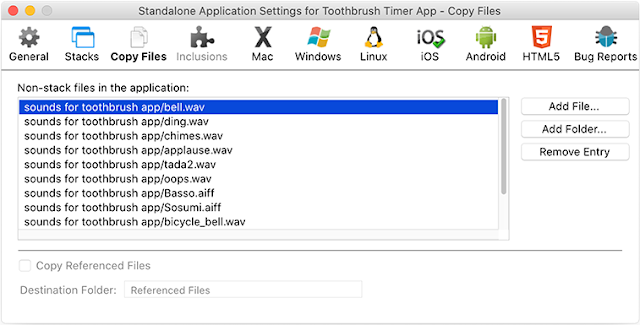 Here was the code I was using:

The sounds only started to play once I changed the code to the following:

Note: The tutorial uses "resource" instead of "engine" for the code, but I had used "engine" in a previous app I made back in 2013, so I switched to it instead. Not sure if it makes a difference.

Testing the App on an Actual iPhone

I had been dreading this part because I knew it would require me to crawl back into the very frustrating world of the Apple Development Center. I vaguely recall needing all sorts of certificates and something called a provisioning profile. I also recall having to tell Apple the identifying information for the iPhone I wanted to test the app out on. I figured this was going to be a dark day.

Fortunately, I kept good notes the last time I created an iPhone app back in 2013. I found these notes on my Macintosh, dusted them off (metaphorically speaking), and began to follow them blindly. Lo and behold, they pretty much guided me through the entire process. There was one trouble spot. In my old notes (which, of course, were new at the time I wrote them), I got to a point where I had written "Not sure what to do next! So, I check my old notes..." Remember, these "old notes" were old back in 2013. So, I had to figure all that out. But, I updated all of these notes as I went. Here is a link to those updated notes - maybe someone out there in the blogosphere will find them useful. (Beware: This are written only well enough for me to fully understand. All bets are off if you will find them useful.) But, really, I figure I'll be the one needing these notes again when I likely make my next iPhone app seven or eight years from now.

Interestingly, I first tried getting my app to work on an old iPhone SE running an up-to-date iOS, but I had no luck. I then tried to get the app on my iPhone 6S and it worked fine. I think the problem has to do with the age of the phone and the version of Xcode I'm using.

I also took some time to update the graphical design of the app. My goal was just to reduce some of its ugliness. Here's a screenshot of the current app: 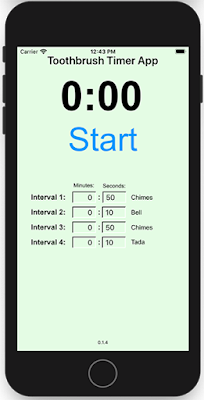 After much testing, it's clear that the interval timer is not working properly when the app is paused in the middle of a timing session. I had mentioned this problem in an earlier blog post. At that time, I thought the problem was minor - I called is likely a "rounding error" problem. But, it's much more serious than that. Also, when I use the vibrate alert instead of an audible sound, the timer really gets screwed up. So, I realize I have to completely overhaul the programming of the intervals. I have some ideas of how to go about this, but I'll save that for a future post.

For now, I at least have an app on my iPhone that helps me brush my teeth very evenly.