It really bothered me how boring my last post was. So, here is a little example of what one could do with the skills described in my last post, coupled with a little knowledge of variables and random numbers.

Here is the script from a button titled appropriately enough "Draw Colorful Lines at Random":

I hope you can quickly see that it is nothing more than a quickly revised script of the button "Draw Lines" from my previous post.

Here is a screenshot of the program after running for 60 seconds: 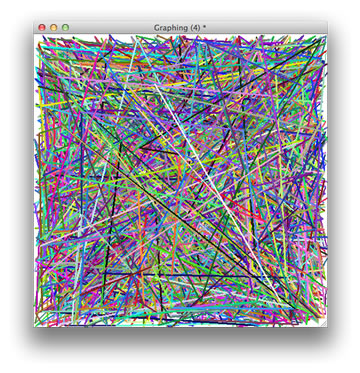 And, this static image, "avant-garde" as it is, is nothing compared to being mesmerized by watching the program run.

There, I feel better.
Posted by Lloyd Rieber at 6:44 AM