Building the Permutation Test of Exact Inference with LiveCode

Yes, with a blog post title like that, I fully expect this post to go viral. I'm sure you'll be seeing me on CNN later this evening.

Ah, well, yes, the truth is that words like "permutation" and "inference" are hardly captivating stuff, unless you are into mathematics and statistics. Well, I'm into both, but in a "mere mortals" kind of way. I've been teaching a MOOC (massive open online course) for about two years now with the title "Statistics in Education for Mere Mortals." I love statistics, but I'm not a statistician or mathematician. Instead, I'm your typical educational researcher who has largely favored quantitative research methods and therefore I've become very acquainted with the practical use of statistics through my research. I've been on a mission for a number of years to bring more statistics into our graduate curriculum in instructional design and development.

Side note: I'm teaching this five-week MOOC right now and it is open and free to anyone. Click here for the enrollment page. We are two weeks into it, but it's a self-paced course, so you could easily catch up. In fact, several (very motivated) people have already finished it.

This summer I had the chance to teach a 3 credit version of this course for the University of Georgia. (Now I can honestly tell my wife - finally - that I got paid to teach this course.) I've had a blast.

As I prepared to teach the UGA course, I came across this very readable and provocative article by George Cobb:

Cobb argues that introductory statistics courses should abandon the teaching of the standard statistical tool for comparing the average scores for two different groups - the t test - in favor of something called the permutation test, which is a concept that has been around at least since the 1930s. This approach is only now practical due to the easy access to high-speed computers (such as the one you are reading this blog post on right now). The really cool thing is just how simple and straightforward the permutation test is:

Even though this is a simple procedure, you can immediately see why the test wasn't embraced back in the 1930s - with only paper and pencil, no one wanted to do it! And, there is an even more accurate way of doing the test, namely to only use the permutations possible by dividing 20 scores into two groups of 10 (which, by the way, there are 184,756 different ways of grouping these numbers; check out this web site for a cool calculator). If you use only the unique permutation groupings as your scores in your overall calculation, your p value will be as exact as it gets, whereas the shuffling version has some error built into it. But, as long as you reshuffle a few thousand times, it's close enough.

OK, that's a long introduction to the fact that I built just such a Permutation Test app for demonstration purposes in my UGA course using LiveCode. Here's a screenshot of the app: 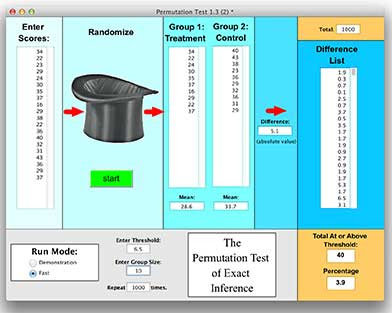 I used the top hat to symbolize the random shuffling. If you follow the blue columns from left to right, you'll see that this follows the step-by-step procedure describe above.

I made a video explaining the permutations test along with a demonstration of my app. But, if you just want to check out the app, fast forward to the 10:42 mark:

If you do fast forward, then you'll miss my favorite part, where I get to use my Pittsburgh Pirate baseball hat to do the reshuffling: 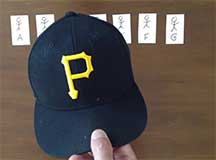 Yes, just as I suspected, the phone is ringing. Gee, CNN couldn't even wait until after I published this blog post!